Sous Vide, anyone? My experience with the Anova Precision Cooker

Right before Christmas, I treated myself to a new kitchen gadget - the Anova Precision Cooker. It was on sale, and I was intrigued by the concept of sous vide cooking. I love spending time in the kitchen and trying out new techniques, so I just had to splurge on this contraption. Plus - I didn't know a single person who cooked suis vide, so I wanted to be an early adopter, and kick some ass in the culinary department. I knew my loved ones were skeptical that meat could be cooked in a plastic bag sitting in warm water... but after reading the Anova blog and seeing so many pics of perfectly cooked steak, I just had to try.

So - you may be asking, what is sous vide cooking? Well, sous vide is French for "under vacuum" and it is a method of cooking in which food is placed in a plastic pouch and then placed in a water bath for quite a long time. It can be vacuum sealed, but that's not a necessity. I did splurge and buy fancy bags on Amazon that are specific to suis vide cooking. They are free of harmful chemicals and food safe for heating. They are not vacuum sealed bags, but that's OK. I just need to make sure that all of the meat is submerged under water, which means getting the air out of the bag manually.

I made my first roast while at home for Christmas. My mom donated the first hunk of beef - a nice top sirloin roast. I cooked the roast for 27 hours! I like to think of this method of cooking as similar to a slow cooker... but rather than providing direct heat from the bottom of the cooker, the Anova swirls the water around, and it is kept at a precise temperature. Sous vide cooking is generally done at a lower temperature than other cooking methods. For instance, I did my first roast at 131 F. It's not very hot, you can easily put your hand in the water. The roast came out super tender and perfectly medium rare. I've also tried 134 F and 137 F... personally, I like my meat bloody, and so 131 F was amazing. However, if I am cooking for guests who may be queasy about bloody beef, I try and go for a little closer to medium (137 F).

Now - when the meat is cooking, it doesn't look that great. But - there's a searing step at the end, and once the meat is browned - it looks awesome. 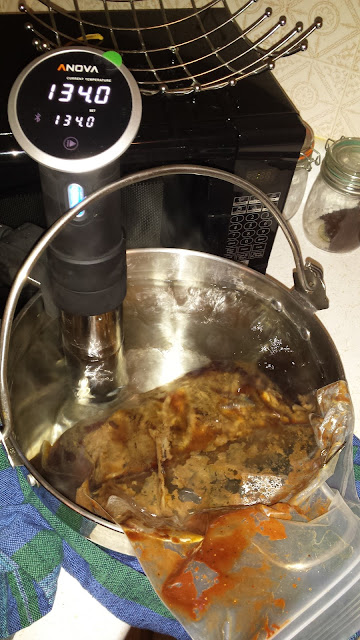 One thing I love about sous vide cooking is that I just need to set it and forget it. I can throw a roast in a plastic bag... add some spices or marinade, seal the bag, hang it over the side of any pot, put in on my counter, set the Anova for the temperature I want, and then leave it alone till the next night when I pop it out, sear it quick, use the juices to make gravy, and BAM, dinner is done!

You can use almost anything as a container! A pot, a cooler... a giant bowl. As long as it is deep enough to submerge the meat, you are good to go. And I usually set my pot on the counter, with a towel underneath. If you have stone counters, be careful. You may want to place on the stove top, or on a thick cutting board.

You can leave the pot open and exposed, but to be really careful and avoid water loss, you can cover the pot loosely with a towel. I notice that water does evaporate overnight, but nothing too drastic.

With sous vide cooking, you can ensure perfect "doneness" every single time. Placing food in a water bath, set at an exact temperature, avoids overcooking, because the food cannot get hotter than the bath. This was a food science "knowledge bomb" that took me awhile to wrap my head around. So - let's say that 131 F is the temp that makes food perfectly medium rare. The way that suis vide works, is that whether you leave the roast in for 8 hours or 28 hours, as long as the temperature is set at 131 F, it can never go beyond medium rare. It will come out perfectly medium rare, from one end to the other. The only thing that changes over time is the texture. I cooked my first roast 27 hours, which was probably too long. It was still perfectly medium rare, but the texture was extremely soft. It just fell apart. It almost lost its meat consistency. The nice thing though, is that if you leave your food in the water bath for only an hour or two extra,  it's not a big deal. It's a very stress free type of cooking.

Here are some pics that show the difference between sous vide cooking and traditional cooking, from the Anova website:

With sous vide cooking - perfectly even! 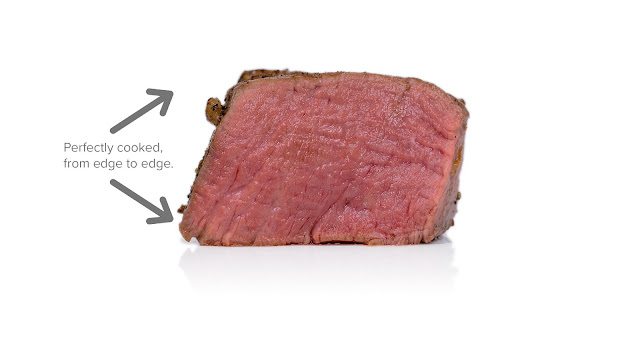 With traditional cooking - there are gradients 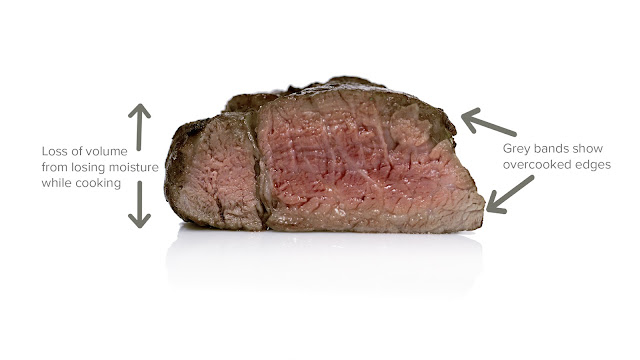 Check out the difference! The sous vide method looks so much better!

Due to the fact that sous vide temperatures are much lower than for conventional cooking, the result is much higher succulence: at these lower temperatures, cell walls do not burst. With cheap roasts, tough collagen in connective tissue can be hydrolysed into gelatin, without heating the meat’s proteins high enough that they denature. This keeps the meat moist! I definitely noticed that all of my roasts were very tender, almost "melt in your mouth." Another bonus over conventional cooking is the consistency of the beef, from edge to edge. When a steak is grilled, there are temperature gradients in the meat. Food cooks from the outside in, which means the outer layers are hotter than the centre. Most traditionally cooked foods have a bulls-eye pattern. Perfectly cooked in the very centre, and increasingly overcooked as you move to the edge. I love the idea of perfectly cooked meat, from edge to edge!

Sous vide cooking takes a lot of experimentation. There are a million blogs and recipes on the internet, and everyone has a different method. Some will say minimum 130 F for medium rare, but you can go up to 139 F and still be in the medium rare range. It's hard to know what to do unless you experiment. Same thing with timing. Some recipes will say 8 hours, some 28 hours. It all depends on the cut of the beef, the size... the desired texture. In addition, some recipes say to brown the meat before placing it in the bag, some say to brown after, and some do both! I prefer to do it after cooking in the bag, so that the browning is the last step, but really, it's up to you! It is fun to try different techniques, as you get to play with food and find what's best for your unique taste buds.

Check out this perfectly medium rare roast Chad and I made! Just a slight sear at the end to brown the beef and give it flavour. 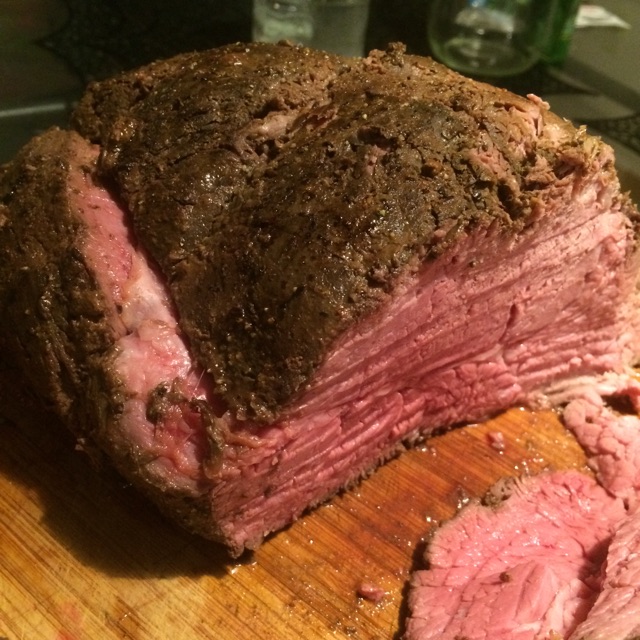 So far, every single batch of gravy made from the juices in the bag has been AMAZING! Below is a dinner Chad made using suis vide roast, with some rice and salad. An unusual take on a beef dinner, but absolutely delicious. 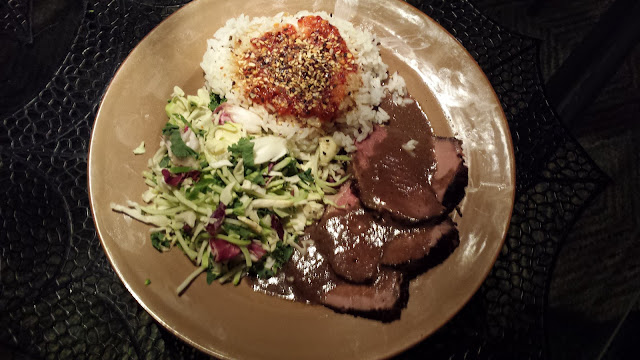 I've also done six chicken breasts at once with the Anova, and it took less than two hours! The chicken was extremely tender and delicious. It was awesome, as I had chicken salads all week, and the tender chicken wasn't dry at all!

Anova has a great food blog with all sorts of recipes. You can do veggies, bacon, dessert, you name it!

Just remember - often there is a finishing step. For instance, with roast or chicken, a quick sear in a frying pan will improve the taste and the appearance. It must be quick though - you don't want to actually cook the food, just brown the outside and ensure the Maillard reaction takes place. The Maillard reaction is a chemical reaction between amino acids and reducing sugars that gives browned food its distinctive flavor. It also gives food the type of appearance we are used to! Nice and brown!

I can't wait to try sous vide lobster and fish! I bet it will be sooo tender and juicy! So far, I highly recommend this type of cooking, and I am enjoying my new device!