The Year of the Fire Cock!

This was my first year getting out to Chinatown and celebrating the New Year first-hand! And - in case you don't know -  2017 is the Year of the Rooster! The "Fire" Rooster in fact! And I sure did see lots of sparks :)

What I did not know about the Chinese New Year is that firecrackers are EVERYWHERE! I was imagining a parade in my head, but instead, I was able to see dragons and lions dancing around and performing rituals, and tons of firecrackers being set off in front of all of the wonderful businesses.

I was amazed at the noise! It was so exciting!!! 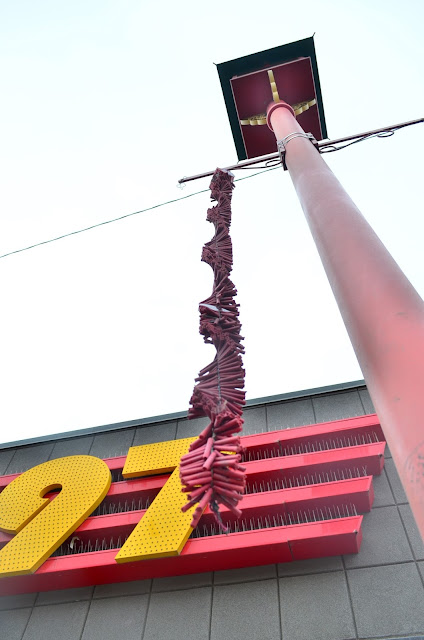 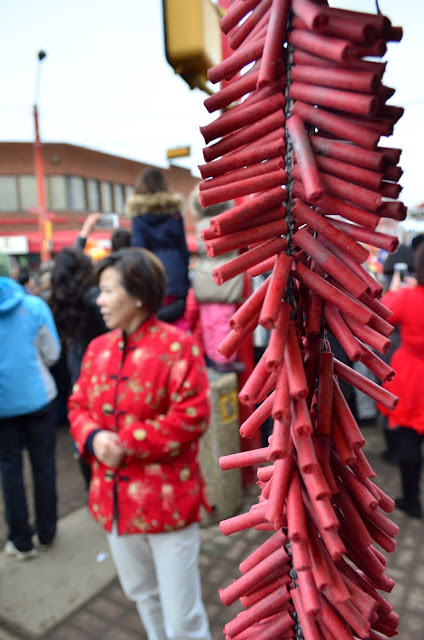 Not only were firecrackers being lit on long strings all over the place (often with balloons and confetti attached for extra pop and crackle), but participants were able to light little ones too!

Here I am, about to blast-off my first firecracker! 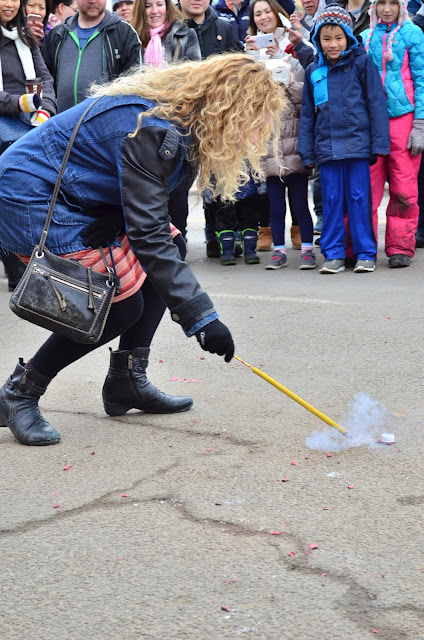 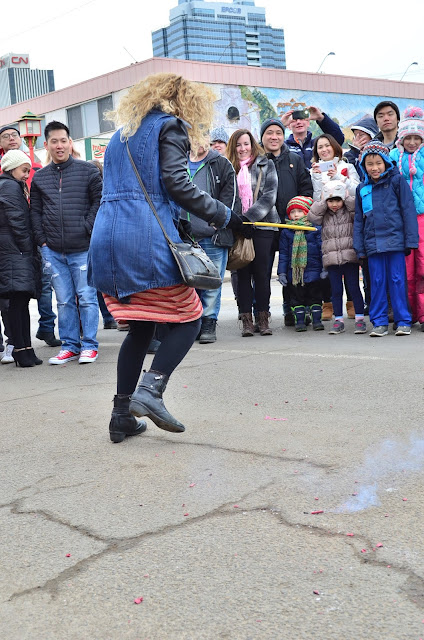 It's amazing how loud and scary they can be! And when the hit your shins - they hurt!

But totally worth it! 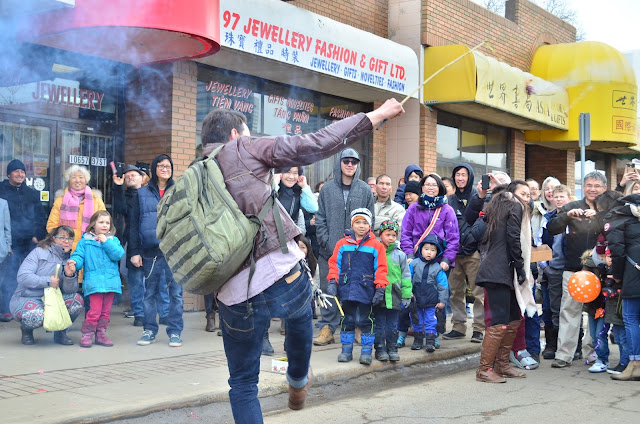 Chad's celebratory dance after lighting a whole strong of firecrackers!

We were lucky enough to see a dragon dance! 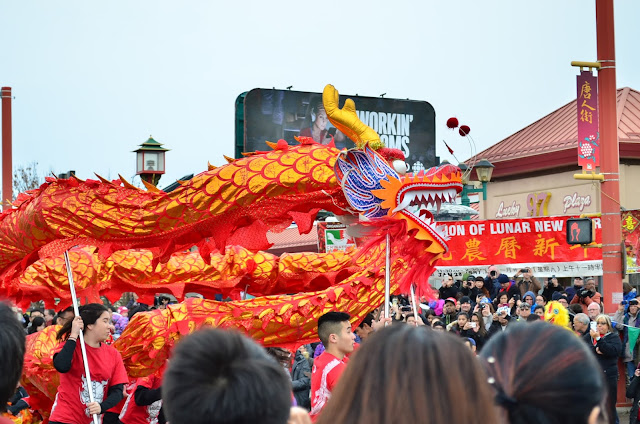 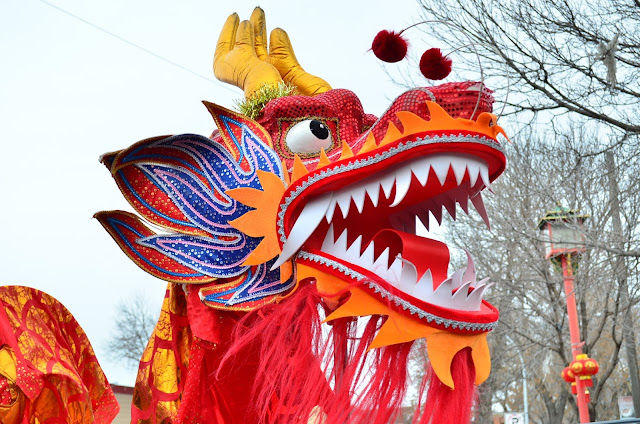 And there were lions too! They would enter the stores to bring good luck, and jump for lettuce! 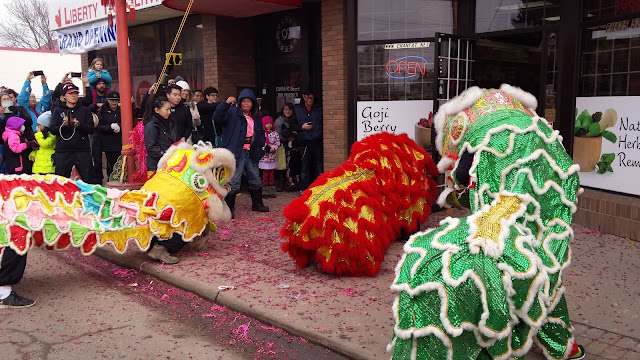 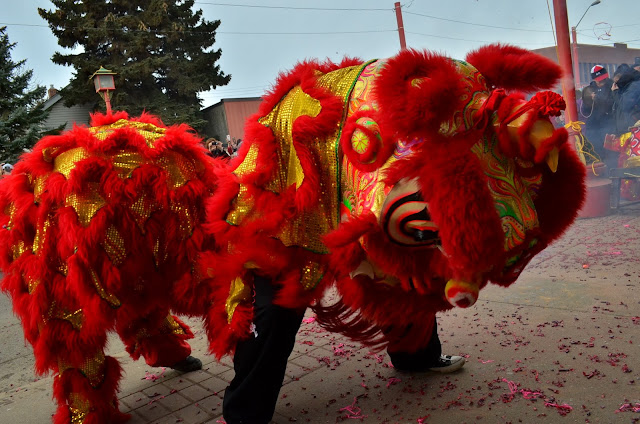 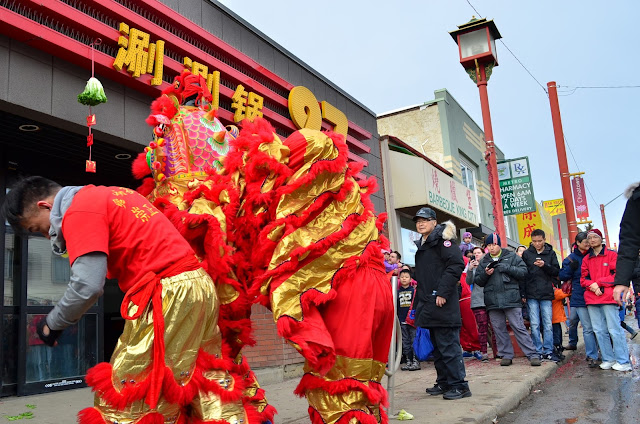 See the lettuce hanging above!

I had to use Wikipedia to find out the reason why the lions jump for lettuce!


During the Chinese New Year, lion dance troupes from the Chinese martial art schools or Chinese guild and associations will visit the houses and shops of the Chinese community to perform the traditional custom of "cai qing" (採青), literally meaning "plucking the greens", whereby the lion plucks the auspicious green vegetables like lettuce either hung on a pole or placed on a table in front of the premises. The "greens" (qing) is tied together with a "red envelope" containing money and may also include auspicious fruit like oranges. In Chinese cǎi (採, pluck) also sounds like cài (菜, meaning vegetable) and cái (财, meaning fortune). The "lion" will dance and approach the "green" and "red envelope" like a curious cat, to "eat the green" and "spit" it out but keep the "red envelope" which is the reward for the lion troupe. The lion dance is believed to bring good luck and fortune to the business.

In the old days, the lettuce was hung 5 to 6 metres above ground and only a well-trained martial artist could reach the money while dancing with a heavy lion head. These events became a public challenge. A large sum of money was rewarded, and the audience expected a good show. Sometimes, if lions from multiple martial arts schools approached the lettuce at the same time, the lions are supposed to fight to decide a winner. The lions had to fight with stylistic lion moves instead of chaotic street fighting styles. The audience would judge the quality of the martial art schools according to how the lions fought. Since the schools' reputation were at stake, the fights were usually fierce but civilized. The winner lion would then use creative methods and martial art skills to reach the high-hanging reward.

It was very cool to see the lions jump up for the lettuce, and then throw the leaves around!

I encourage everyone to check out the Chinese New Year festivities at some point! They are a "BLAST!"

And make sure to eat some dumplings and noodles afterward, as we did! You know, for luck! The dumplings at Urban China were outstanding!

Posted by Missjodieb at 1:08 PM